Picking up where I left off with my post on tribalism. Because I wanted to talk specifically about a recurrent kind of “broken” I am seeing in arguments all over the place — beyond the tiny halls of the Peoples Republic of Science Fiction. This “broken” is most commonly manifested among well-meaning straight Caucasian folk, but is often fostered and preached about by non-straight and/or non-Caucasians of a particularly aggressive “progressive” persuasion.

● Any member of the majority group is always guilty of ism no matter what.
● The ism is a fatal character and moral flaw, from which the afflicted cannot fully recover.
● Members of the minority group can never be guilty of ism; because the minority group lacks power.
● Members of the majority group must be “shown” their ism and/or be made to confess their inherent flaw; en route to being reformed.
● Reformed members of the majority group will actively assist in pointing out the ism of unreformed people.
● Proof (of ism) is not required; guilt will always be assumed.
● The more a target denies or resists charges of ism, the greater the obvious culpability.
● The unreformed are “fair game” for all manner of actions designed to be personally destructive to the target(s).
● Lying (and other unethical behavior) on the part of the plaintiff(s) — against the target(s) — is forgivable, because the ends justify the means.

Folks, it doesn’t take a genius to figure out that this is Witch Trials 101. There’s nothing new about any of it. All we’ve done is wrap the witch trials up in trendy 21st century politics. When people are automatically guilty of a crime, for which no evidence is required, and the accusers are permitted a kind of political immunity while the protestations of the innocent are merely used as “proof” that the innocent were guilty all along . . . that’s witch trials. Burning at the stake. Except, these days the stake and the village square are located on the internet, and the villagers — with digital pitch forks and torches — are anyone with access to Twitter, a blog, Facebook, or some other form of social media.

Some people who actively engage in the witch trials and witch hunts, are cynics using the process for pure spite, vindictiveness, or to take down enemies.

But many people are not cynics; they really do believe they’re doing a good thing. Or at least, they want to be seen doing the “good thing” so that they can (hopefully) avoid becoming a target themselves.

I call this behavior RINGING THE BELL. 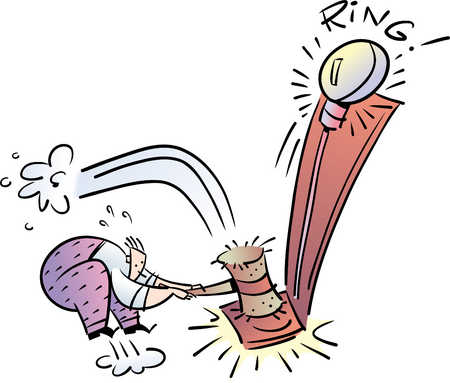 Think of it like the classic carnival game. At the bottom of the pole you have the weight. The bottom of the pole represents the default state of existence, which (according to the “broken” narrative) is ism. Could be racism, could be sexism, could be homophobia, or transphobia, etc. Whatever terrible ism is hiding under our beds, that’s where the bottom of the pole is. And that’s where you are, simply as a matter of breathing air. The only way to “prove” you are reformed, is to take your mallet and thwack the lever, hurling the weight up the pole with the intent to ring the bell. The harder and more often you slam your mallet down — over and over — the more you will feel like (and be seen by others being) reformed. AKA: you are an “ally” in the fight against ism.

Again, ethics aren’t really part of it. What counts is how much force you put into slamming that mallet. Ergo, how many times others hear or see you ringing the bell.

Things that count as “slamming the mallet, ringing the bell” on the internet:

And so on, and so forth.

Really, it’s an alluringly toxic wedding of no-heavy-lifting slacktivism, with guilt-free self-righteousness — that doesn’t require a participant to get his or her hands dirty, can be done from behind the safety of a keyboard and screen, affords anonymity (if you want it), or allows you to self-valorize in front of spectators.

Is it any wonder this game has become so popular?

I tend to reject the “broken” wherever and whenever I encounter it. Mostly because I don’t believe in the model of the carnival game, where everybody’s default resting state is ism. This is just another kind of original sin, secularized and modernized. I’ve never trucked with people who espouse the “broken” doctrine. And it is a doctrine. Very trendy, and very popular — especially in the hothouse halls of university humanities theory. If you believe the theory, you can never escape your original sin, because you were born with it. And your only recourse is to adopt the hair shirt, set about decrying original sin in others, and trying very hard to make sure you’re one step ahead of the inquisition.

Which is — to my mind — not only morally and ethically wrong, it’s also futile; and exhausting. Nobody who is actually enduring a societal injustice is much helped by participants staging the kabuki “broken” theater. The kabuki is purely about dancing the dance according to the forms, so that participants can align themselves correctly — in order to not be seen on the wrong side of the political and social tracks.

Again, this is no-heavy-lifting slacktivism.

But who wants to have to keep ringing the bell? Sooner or later you’re going to run out of steam — not to mention friends. You can’t run around pointing your finger at the motes in the eyes of others, while ignoring the beam in your own. Eventually you will slip up and your “friends” on the correct side of the kabuki will throw you to the wolves — you will be declared “fair game” and all the tactics you formerly used against others, will come home to roost against you personally.

Better — I believe fervently — to abolish original sin. Stop the kabuki. No human being is born into a state of ism and no person should ever fear being counted guilty of a crime that has not actually been provably committed.

Yes, there is the question of tribalism, and it’s not a bad idea to keep on your toes in this regard. Because I believe tribal instincts run deep in human beings, and we manifest our tribalism every day. Often in very benign and harmless ways. Sometimes in less-than-harmless ways, too. But merely keeping your wits about you, and working against tribalist instinct that can turn destructive, is the hallmark of the thinking mind. It proves that you give benefit of the doubt to your fellow human beings.

The witch hunt is not the hallmark of the thinking mind. There is no benefit of the doubt. The kabuki is the activity of the unthinking — people who seek an easy path to the cheapest sort of binary absolutism, and an unearned self-elevation above others.

Presently, the “broken” is running rampant in our popular culture. Nobody is quite sure what to do about it, except more and more people are growing alarmed at the consequences. Lives and reputations are being ruined. Careers destroyed. Families attacked without warrant. And much worse still.

Every time any of us engage in ringing the bell — despite our best intentions — we cause the candle flame of the Western Enlightenment to flicker. We’re enshrining emotion, at the expense of reason. Placing inductive logic and argument above deductive logic and argument. We’re inviting back into our hearts (and our heads) the many centuries of Dark Ages philosophy, which shackled culture after culture throughout history.

And no, it doesn’t matter if you think you’ve got good intentions.

The road to Hell has been paved with those for countless thousands of years.

Hopefully a breaking point is reached — that we’re either near it, or at it.

Because the society we create today, is the society we gift to our children tomorrow. And right now, society is imperiled from within, by the witch hunters.

Innocent, until proven guilty. Beyond any shadow of doubt. With facts. With evidence. That is the precept upon which liberal Western law is based. It is the foundation of the polite society. It is the root of what makes us a great people. We’re presently edging away from what makes us great. We’re letting our good intentions take us down a path to perdition. Hopefully enough courageous individuals straighten up and realize what’s happening — with time to slam on the brakes, and reverse course.